In December 2014, 50 years had passed since John Coltrane recorded maybe his most famous album, A Love Supreme. When I was younger I listened to a lot of music, and most of all to jazz (in a wide sense of the word). John Coltrane was one of those. I had a bunch of vinyls with him, and also most of the recordings he made as member of Miles Davis' groups. I recently resurrected my vinyl collection from many years of storage, and there are parts of it that seems lost for some inexplicable reason, like most of my Miles collection (about 40 albums, iirc). I do have a few left, and some of Trane's records. I do not recall having owned a copy of A Love Supreme, though.

Althought Coltrane made solo recordings during the late fifties, it was his permanent groups of the sixties that left a big and lasting impression on jazz. The quartet that is featured on A Love Supreme and a host of other albums, had a great influence on small group jazz and improvisational music. The instrumentalist Coltrane also made a huge impact on musicians after him. A Love Supreme is kind of the apex of his quartet's music and in 1965 he expanded and changed the group.

A Love Supreme is spritual music, or maybe spritually inspired music. That does not make it better or worse. I am a life-long agnostic. Sometimes I have been leaning on atheism, but am occasionally put off by atheists that sound like they invented a new religion, worshipping "science" as the final truth. As if sciences have final truths... But I digress. However, some music I really enjoyed over the years have been "spiritual" such as the later Coltrane, Albert Ayler and Pharoah Sanders. I also enjoy some overtly religious music such as earlier Staple Singers. Music that somehow is filled up with its own holiness is off-putting, but the combination of ecstasy and meditation that for example is found in Coltrane's music speaks to me. I do not know why. Music is about transporting the mind and soul to another place. If you dance, the body, as well. 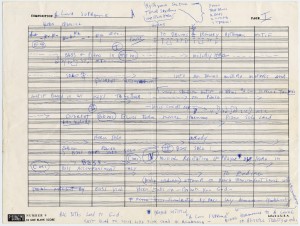 Score for A Love Supreme. Original author: John Coltrane. Reproduced from the archives of the Smithsonian. Public domain, via Wikimedia Commons.

I always thought of Coltrane as being part of the modern era. I am quite astonished that it was fifty years ago. I started listening to him as a teenager in the late 70s. I guess I am getting old. To me, his music is as fresh now as back then. Good music never dies. Just look at Mozart 😛

Addendum: Imho, one of the best laments recorded is Coltrane's Alabama. Can be found here. In light of the last few days happenings in Paris, I think it is a fitting song.