The years go by, and the only certain thing is the change of seasons. Which are four. Or so we think and see it. Categories are arbitrary, but it would be hard to imagine not labeling parts of the year in seasonal fashion. That then they mostly seem bad or wrong ("no real summer") is perhaps a bit funny. Today came the first snow of this autumn. Roofs were painted whitish for an hour or two. It wasn't much. Quite early for snow, though even around here we had the occasional year when there are several decimetres of snow in late October. Below is a picture I took of a roof with a collage of leaves and snow. 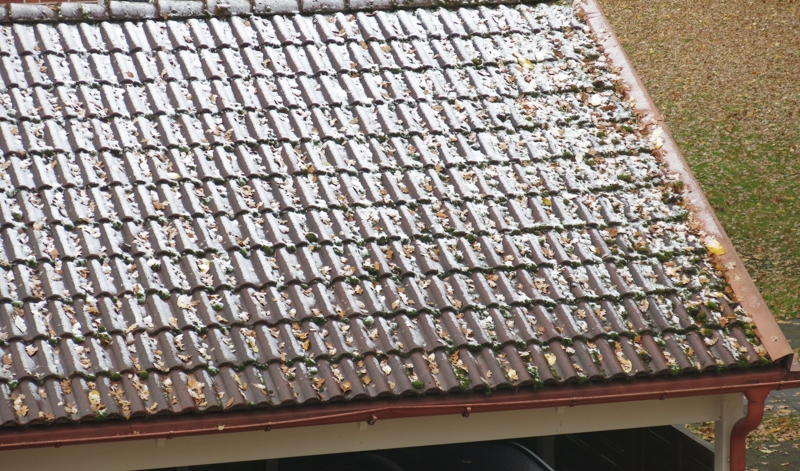 Yesterday, trees were still painted yellow, but today's wind, snow and rain have relieved them of most of their leaves. A nice autumn day is maybe my favourite, and we had a few good ones 2016. Often the wind and rain robs trees continously of leaves, so that explosion of colour is not to be seen every autumn.

I've mentioned before many times about cranes' migration as a personal seasonal sign. This year I heard them many times, but did not manage to spot them even once. The first time was September first, which I think is unusually early, and then the last ear-spotting (hear-catching? audio-grappling?) late in the same month. It was really warm in September, and it did not feel like autumn. I did the autumn cleaning of windows sometime in September. It was very nice weather, I put on music that fit, Vivaldi's Four Seasons. I have a vinyl album with Yitzhak Perlman, one of the most famous violinists alive, and it was nice to play quite loudly with windows open. I didn't really notice any passersby, I hope I did not scare any with the beautiful and powerful music. I am not a big violin connoisseur, and would fail any blindfold test on famous violinists, but the little I have heard of Perlman does not touch me deeply. But taste is personal. I love how Norwegian Mari Samuelsen plays Four Seasons with a fantastic power, beauty and intensity. So far I only found clips with her of Winter and Summer. I do not link to any clips on youtube, it's easy to search for them there, or whatever streaming service of your choice. Recently I been looking up a lot of string music. One violinist that has a (imho) a very beautiful tone (apart from jawdropping technique artists at this level have) is Arabella Steinbacher from Germany. Then there is always Jascha Heifetz...

When I was younger I went to a lot of concerts, but family life and then bad health has sadly put limits. It's exhausting for me to travel, and also sit still for long periods. But about two years ago I saw Four Seasons live with an ensemble that partly were standing. I can see no reason why (especially smaller) ensemble violinists sit, while soloists stand, except as part of tradition. It gave a special intensity to the performance, seeing the violin and viola players in almost full swing and sway just as the soloist. It also served as reminder that heavy metal has gotten a lot of inspiration from classic music, not just the power, majesty and theatrical qualities, but some of its groove. Looking at symphony orchestras performing, some members look like they would prefer to jump up just to get that extra life and nerve into it. 😉